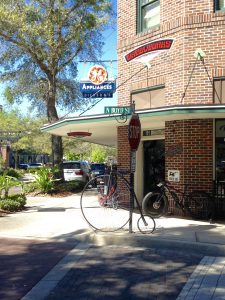 Look for cool ways to attract people to your brand. Is there an eye catching symbol that people that would be drawn to that ties in with your brand.

Example: Bike shop uses a penny-farthing, also know as high wheeler, in the front of their store.

The high wheeler was the first machine to be called a bicycle. It was popular in the 1870’s and 1880’s. It became obsolete in the late 1880’s  with the development of the modern bicycle.