Mission Acceleration Business Accelerator Program
How to Find Your Customers 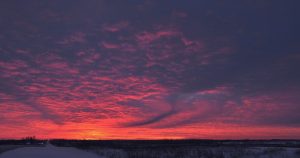 The winter solstice is the shortest day and longest night of the year that occurs annually between December 20th and December 23rd.

The winter solstice is when the North Pole is at its farthest from the sun during its yearly orbit around the sun. The winter solstice is the astronomical beginning of winter. Meteorological winter begins December 1st and lasts until the end of February. It’s marked by the coldest average temperatures during the year.

FYI: A red sunrise can mean that a high pressure system (good weather) has already passed, thus indicating that a storm system (low pressure) may be moving to the east. A morning sky that is a deep, fiery red can indicate that there is high water content in the atmosphere. So, rain could be on its way. Red sky in morning, sailor’s warning.

At sunset the light from the sun grazes across the surface of the earth, passing through a long column or path length of the atmosphere. During its passage through the atmosphere the blue components of the light are reduced in intensity, making the transmitted beam of sunlight more yellow or even red in color. Red sky at night, sailors delight.